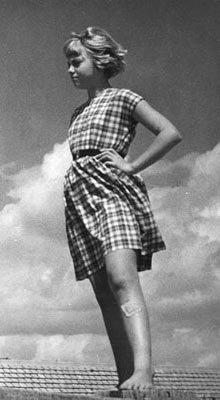 One of the things I looked forward to on retiring from my day job was to be able to “make things” all day, every day.

Like many of my generation who didn’t have video games or even TV to watch as children, I was taught to knit and sew by my grandmother.

My first attempt at sewing was when I was only four years old. The next door neighbour had given my mother two blue cot blankets. I announced that I wanted to make a dressing gown from them for my younger sister.

My grandmother – very wisely as it turned out – said I should sew the sides first and cut it afterwards. She threaded me a needle and showed me where I needed to sew. After a couple of stitches I had a brainwave. Instead of taking numerous small stitches all up the side, it would be far quicker to just take one very long stitch – which I did.

The error of my ways was pointed out to me at which point I decided that my sister didn’t need a new dressing gown after all.

Later at junior school we had sewing lessons from a spinster lady who epitomised thrift having lived through two world wars. We did all our sewing by hand and when we removed tacking stitches we were made to pull the tacking thread out in a single piece to re-use.

We made bloomers with run and fell seams when I was nine – all by hand. The leg openings were finished in shell-hemming. I don’t think I’ve ever shell-hemmed anything since – but I know how to do it should it ever be required!

I doubt any of us ever wore the knickers – I certainly didn’t.

The following year I made a dress for myself in green and brown check cotton – all by hand. Photo shows me wearing it at the beach.

In my teens I used to frequent jumble sales in our village. In those days there were no shops selling second hand designer clothes for people. The landed gentry would donate their unwanted dresses to the local jumble sales. Such garments usually provided ample fabric for me to create something fashionable.

I still love to sew by hand although I do use a sewing machine for larger items! The project of which I am most proud was my daughter’s wedding dress.

My keepsake dolls now provide me with the challenge of recreating from a photo. Although I generally sew the dolls’ bodies by machine for strength, the clothing is often sewn by hand for added precision.

I love it when what starts out as shapes of plain fabric is transformed into a little being that appears to have a personality all its own.

As well as sewing, I also still knit from time to time, indulge my interest in astrology with my necklaces and create in mixed media.

I love to create something a bit different. Therefore the items I sell here in my shop are made to order and personalised in some way making them one-of-a-kind. The exception is the mixed media up-cycled gift boxes and occasional other small items which I make now and then when inspiration strikes.

I’m grateful to be able to work on something knowing it’s just what someone, somewhere wants to own themselves or give away with love.

I will write about my other craft interests in future blog articles. Find more about me and my crafts on Facebook

1 thought on “About Me and How I Learnt to Sew”