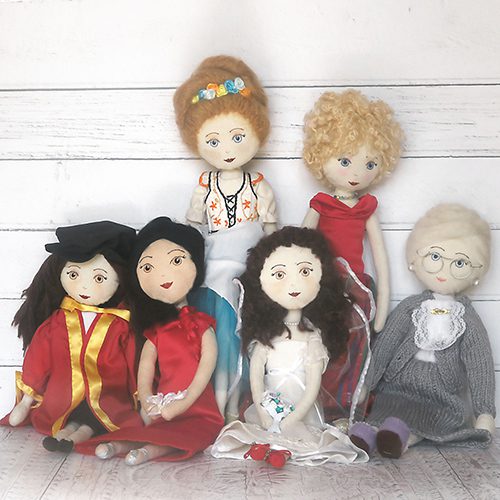 Just as writers of fiction will say that often their characters take over and start doing things which they, the writer, had never intended, so too for a dollmaker there’s a point in the creation of each little person when it ceases to be just fabric and thread and becomes a personality all of its own.

A keepsake doll is able to evoke emotions and memories in a far more colourful way than photos alone can do.

During the 1920s a particular passion for dolls meant that many society ladies would own one or more of these. Groups of friends would meet up and play out adventures and live fantasy lives through their dolls in much the same way as children do with Barbie today. These dolls usually wore the art deco fashions of the day and were often quite large, even up to 36 ins tall. When not being displayed among groups of friends they typically lived on their owner’s bed or on a chair in the bedroom – hence they were known as boudoir dolls. 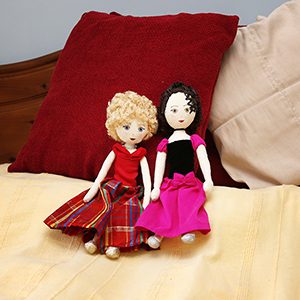 Several major toy making companies made these dolls and some commanded high prices. Their heads were often porcelain or papier maché.

Few people today would have the space to accommodate such large decorative dolls especially in the bedroom. These days smaller is beautiful and collectible dolls are usually under 20 ins in height. But the fascination with dolls still persists for many of us. Dolls, as replica humans, play a role in our lives in a way that other objects can’t.

I love making dolls. From time to time I create a one-off doll from a particular time in the past. The size and composition varies. It may be made of felt or calico and dressed in a fashion dating anywhere from the 16th century to the 1960s.

For me an exciting challenge lies in the creation of personalised keepsake dolls. For these I use a standard design for the shape and size but then finish the doll according to details shown in a photograph provided by the purchaser. My aim in making these is of finding ways to replicate the original, especially the hairstyle and clothing.

Even when some of the original fabric is available it often isn’t suitable for the doll because on the smaller scale it doesn’t drape in the same way. This means a substitute must be found in a similar colour and design. Only by doing this will the doll convincingly represent the original.

There are many different reasons for wanting a keepsake doll and some typically require more hours of work than others. I currently divide these into four separate listings:

These dolls are usually the most complex. They are created wearing clothes that replicate the dress worn by the bride, a bridesmaid, or maybe even the mother of the bride or groom on the wedding day.

A bride doll might be given as a gift for the mother of the bride to remember her daughter’s special day. A bridesmaid doll as a memento for an adult bridesmaid. A keepsake wedding doll might also be given as an anniversary gift – perhaps for a silver wedding?

These dolls celebrate a special occasion such as a graduation or maybe a stage performance.

They make a special gift for a loved one who has just graduated, undertaken their first major acting role, gained an important sporting award, etc.

The prom is a special event in a teen’s life and some will love having a reminder of their special outfit that can sit on their bed and keep the memory alive.

A keepsake doll doesn’t need to look like the person it represents to evoke the cherished memories – photographs serve that role. Clothing is a very powerful memory trigger due to the way it made us feel at the time in question – from the comfort of typical every day wear, to something extraordinary for a special occasion.