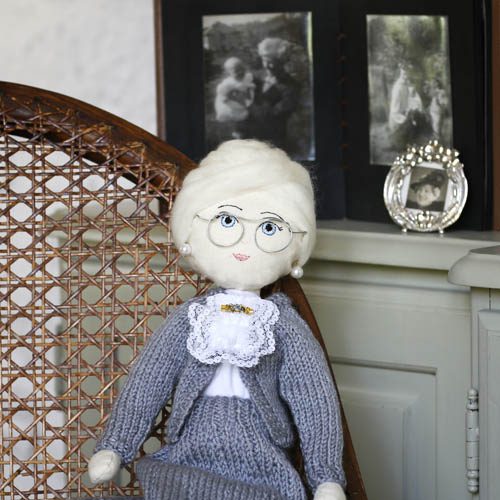 After I finalised the pattern for my keepsake dolls I was left with several little “ghost” people so I decided to finish them in ways appropriate to my own story.

It was Grandma who taught me to knit when I was about five years old. When I was a little bit older she let me sew things on her Singer sewing machine. I used to love the rhythmic clattering sound it made as the handle was turned.

Grandma made her own clothes. She always wore a two-piece knitted outfit in a flecked grey wool. Once, when she’d been put on a diet by the doctor, the skirt was too big so she unpicked it all, wound the wool into skeins, washed it and re-knitted it smaller. This was done with six hundred stitches on a long circular needle. Even as a small child I marvelled at her patience.

Under her knitted cardigan she wore a blouse with a lace jabot, fastened with a gold brooch. Like most adults in those days Grandma smoked. Well, I suppose, in her case, it couldn’t really be called “smoking”. She’d put a Players Weights between her lips, light it and then nod off. My sister and I often watched, entranced, as the ash curled and grew longer finally dropping onto her bosom. (Children can be cruel!) The aroma of singed jabot generally woke her up.

But what really surprised me when I’d created the keepsake doll in her image was the number of memories it brought back to life. These weren’t things I’d forgotten but memories which, over the years had lost their “colour”. Now not only the images live again each time I look at the little keepsake doll, but also various associated sensations and emotions.

I then went on to create a doll in my school uniform… but that’s another story.

2 thoughts on “My Grandma Keepsake Doll”