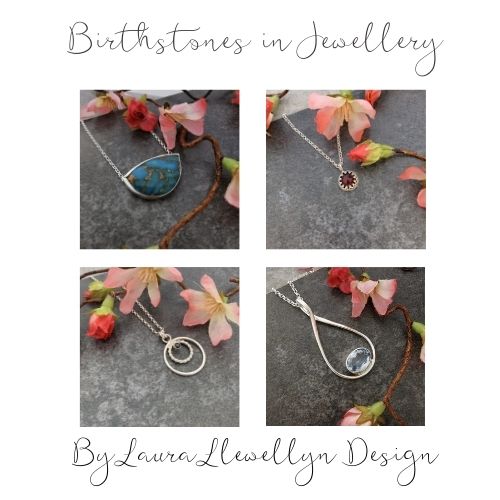 Birthstone history can be traced back through the centuries however it was in 1912 that the American National Association of Jewellers created an official list.  This list is still in use today with a few changes and additions.

Each month has one or 2 (or 3 in the case of June and December!) gemstones assigned as birthstones and these can make a great gift idea for a special birthday, to celebrate a birth or even as a multi gem piece of jewellery to symbolise your family unit. Garnets are most commonly known to be red but do come in an array of colours including green and purple.

The name garnet comes from the latin word granatus which means pomegranate; which links to the classic
red colour of this beautiful gemstone.

This gemstone is thought to bring the wearer good health, wealth and happiness.

As well as being the January gemstone garnet is also the
gemstone for a second wedding anniversary. Amethysts come in an array of shades from lilacs through to rich dark purples and can be cut in many different ways.

The name amethyst comes from the ancient Greek word ‘amethystos’ which means ‘not drunk’. The gemstone was believed to prevent intoxication!  That is definitely my favourite gemstone fact!

As well as being the birthstone for February amethyst is also the gem for 6th and 17th wedding anniversaries. It gets its name from 2 latin words; aqua meaning water and marina meaning ‘of the sea’.

As well as being the March birthstone aquamarine is also the gift of a 19th wedding anniversary. Diamonds are formed under extremely high temperatures and pressures  in conditions that exist approximately 100 miles below the surface of the earth. Diamonds are the hardest material on earth and are made from around 99.95% carbon.

Diamonds have been popular for centuries; in the 1st century AD the Roman naturalist Pliny stated “Diamond is the most valuable, not only of precious stones but of all things in this world.”

Diamonds are graded by categories known as the 4 c’s- cut, colour, clarity and carat.

As well as being the birthstone for April diamond is also the gemstone for 60th and 75th wedding anniversaries. Emeralds are the green variety of the mineral beryl and have been used in jewellery for thousands of years.

They have been used in jewellery for thousands of years and it was first mined in Egypt in 330BC.  Cleopatra is known to have worn this beautiful gemstone in her jewellery.

The oldest emeralds found (to date) were created 2.97 billion years ago in South Africa!

As well as being Mays birthstone emeralds are also the gems associated with 2oth and 35th wedding anniversaries. The month of June has 3 birthstones associated with it; pearl, moonstone and alexandrite. For this blog I am going to focus on pearls.

Pearls have been used in jewellery for centuries and were first written about  by a Chinese historian in 2206 BC.

Pearls come in a rainbow of colours. White, soft pink, grey and peacock blues can occur naturally but brighter colours can also be created by adding dye to the shell before the pearl begins to grow.

The shine on a pearl is known as lustre and can easily be damaged. It is advised to spray products such as hairspray and perfume (and allow them to dry) before putting on pearl jewellery.  To keep their sheen gently wipe them with a damp cloth after wearing.

Did you know that real pearls feel warm to the touch and have a gritty texture if you lightly rub them on your teeth? You can spot a fake if it feels cold to hold and/or feels smooth on your teeth!

As well as being the birthstone of June pearls are also the gift of a thirtieth wedding anniversary. Rubies are in the family of minerals called corundum which also includes sapphire.  In its purest form corundum is colourless; the variations in colour come from the trace elements in the gems.  Chromium is the element which gives ruby its colour.

Rubies have been treasured for years and early civilisation believed the gems held the power to life.  The gem remained popular throughout the middle ages and was sought after by Royalty.

The word ruby comes from the Latin word ‘ruber’ which means red.

As well as being the birthstone for July Rubies are also the gem for a 40th wedding anniversary.

Check back throughout the year as I will add more info for each gemstone each month.

Head over to my shop to see my range of gemstone jewellery and do get in touch if you are looking for anything in particular whether it’s a birthstone piece or just something with your favourite gemstone in.

Do you have any jewellery with your birthstone in; do you prefer another gemstone?! I’d love to know.

4 thoughts on “Birthstones in Jewellery”